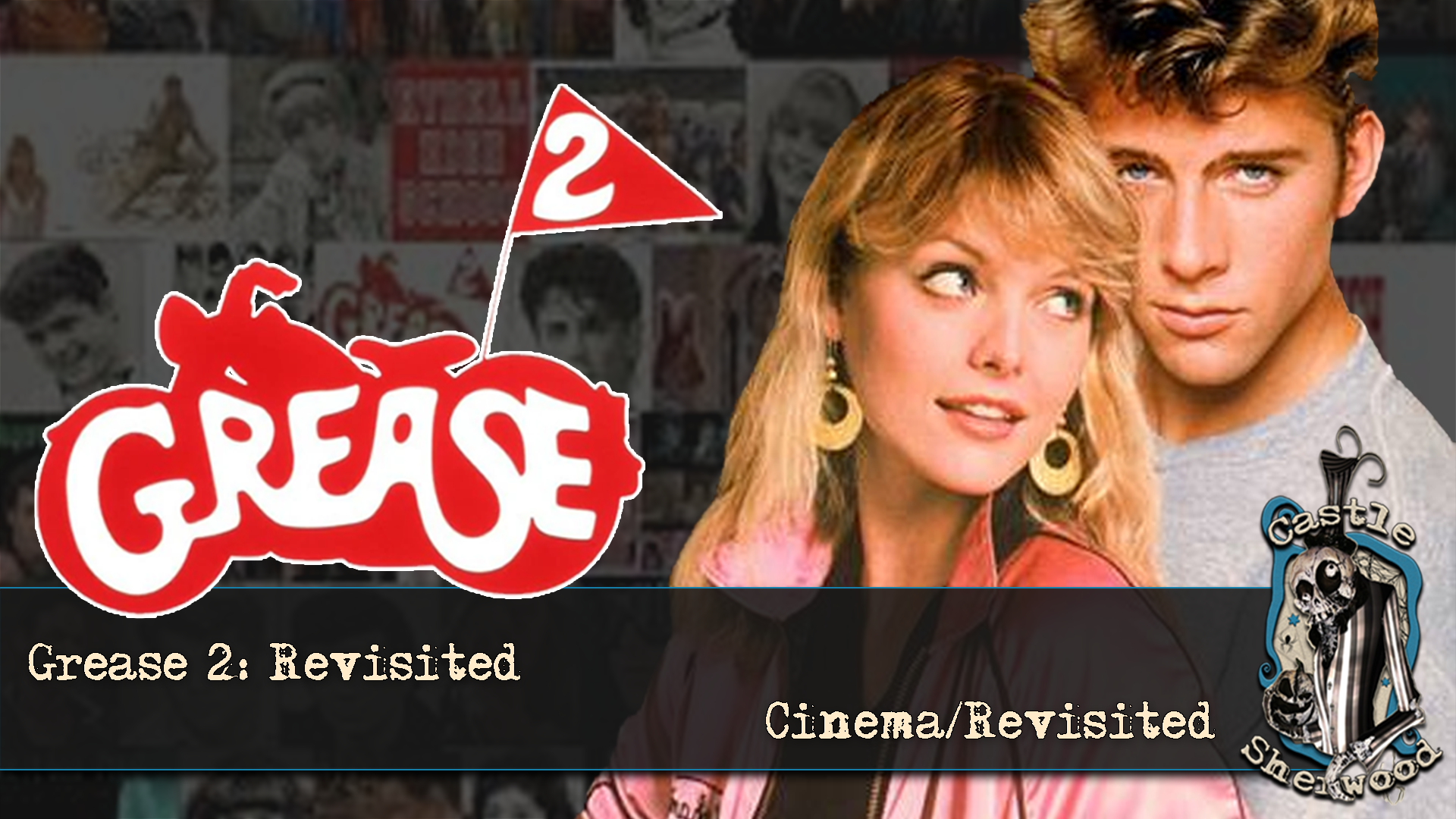 Grease 2 is a movie though that had a lot of problems getting made one of which was that the script wasn't even completed when they started filming. The cast is ad-libbing lines as they film and that shows. I think the only thing they got right with this movie as far as the production goes, is the casting. The cast is great, they are likable characters and they are good actors. Frenchy (Didi Conn), Balmudo (Dennis Stewart), Principal McGee (Eve Arden), Blanche Hodel (Dodi Goodman) and a handful of others, came back to reprise their original roles but otherwise, it is an entirely new cast.

Probably the most notable of the new cast and who would go on to do some pretty great things, is Michelle Pfeiffer, the female lead. Grease 2 would be her third movie and her fourth movie would be the cinema classic Scarface. The other cast members including the male lead, Michael Carrington (Maxwell Caulfield), who is Sandy Olsson's (Olivia Newton-John) cousin, would go on to play in smaller movies and TV shows. Maxwell Caulfield can also be seen in the show Beverly Hills 90210, in the episode "Class of Beverly Hills" as Brenda's older date.

In the movie Grease 2 you have pretty much a whole new cast, which means a whole new story. It is not a continuation of Grease and that's where I think some of the problems lie. When you do a sequel to a movie people want to see the same cast or a continuation of the story to find out what happens next. That is the whole point of having a sequel, to see what more happens to a cast that we've become invested in. Grease 2, along with so many other movies does not follow that format.

So it is 1961, two years after the original Grease ended. The first day of school has arrived ("Alma Mater" from the original musical) as Principal McGee and her secretary Blanche react in horror as the students, among them the new T-Birds and Pink Ladies, arrive at high school ("Back to School Again"). The Pink Ladies are now led by Stephanie Zinone, who feels she has "outgrown" her relationship with her ex-boyfriend Johnny Nogerelli, the arrogant and rather immature new leader of the T-Birds.

A new arrival comes in the form of clean-cut English student Michael Carrington (a cousin of Sandy Olsson from the previous film). He is welcomed and introduced to the school atmosphere by Frenchy, who was asked by Sandy to help show Michael around. Frenchy reveals she has returned to Rydell to get her high school diploma so she can start her own cosmetics company. Michael eventually meets Stephanie and quickly becomes smitten with her.

Grease 2 may have been better received if it was called something else but still had a similar story. That's hard to do though and Paramount was trying to capitalize on the popularity of Grease when they should have just named it something else but told the same/similar story. If you name it something else though you have to move away from the T-Birds and the Pink Ladies, so I understand why they called it Grease 2. I mean why would you make a movie called Greasers that is about The Falcons and The Purpleettes? That seems pretty stupid... You see the predicament that I'm trying to create. So, we're stuck with a sequel to a very popular movie that has nothing to do with the original movie. That alone means that it's going to crash and burn at the box office.

Instead of cars this time the Greasers are on motorcycles doing their motorcycle thing. This is where Balmudo (Dennis Stewart) comes in. After losing his car to Danny Zuko (John Travolta) in the original Grease, he decided to ride motorcycles. I don't know about you but I like his character, I always like this character. Frenchy (Didi Conn) does return but she is not in the movie very much. Matter of fact, she is still a Pink Lady and even where's the jacket but she's not even featured in the Pink Lady clan and doesn't hang out with them at all. They pretty much ignore her through the whole movie. Kids can be so cruel, that is highschool for you though. Her character was brought back for Paramount to try and capitalize on her original character. It did not work out and it did not help this movie. Just thinking off the top of my head is I'm writing this, maybe if a few cast members from the original Grease came back in small cameo roles here and there... maybe that would have helped? Maybe Rizzo (Stockard Channing) is Paulette's (Lorna Lyft) older sister or something and has a scene with Paulette? I don't know...

The story with Grease 2 is pretty simple like it's predecessor. But in this one, the guy changes himself completely to be with the woman of his dreams. (There is a lot wrong with that because in real life you don't have to change anything about yourself to be with the person of your dreams). And of course, the female lead Stephanie Zinone (Michelle Pfeiffer), rejects all of his advances. So, he decides to become a "cool rider", changing everything about himself to gain her attention, which he finally does.

All in all Grease 2 is a good movie with a good story that makes you feel good because, in the end, the guy gets the girl. It has a happy ending and we all like happy endings. The acting is good but not great, it could be a little bit better in that department. The soundtrack is really good and there are plenty of good sing-along songs on it but the songs don't fit the time frame of the movie, which is a little strange.

Grease 2 is not on the level of the original Grease but it is still a good movie. If you haven't seen Grease 2 and you're sitting around on a Friday night maybe you should find it to stream. It's probably available on most platforms. I'd bet by the end of the movie you find yourself humming along with some of the songs and the acting is good enough that you will become invested in some of the characters.

See the original trailer below: